was the first center for Knight Templar in Norway, which caused then Deputy Grand Prior Carl Vilhelm Anger, with responsibility for Nordic contact, attended the "Garrison Ballet" in Hamar in January 1988 and there made contact with Norwegian reserv officers which he believed could be candidates as Knights in Knight Templar.

The result was that three Norwegian Knights, Bakke, Lie and Morland was bubbed to Knights in Stockholm on 5: e November 1988. 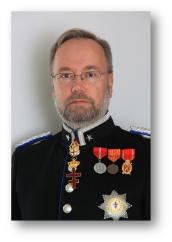 The first Norwegian officers were dubbed to Knights on Karlberg Castle in Stockholm in 1988 under the priory of Sweden. Priory of Norway was established as a Commandery in 1994 and became a separate Priory in 1996. Priory were established in Hamar area.

The Knight Templar takes up male and female officers, all categories are represented. The Knights background as officers or reserve officers come into its own in our work with charity. Norwegian Knights are well distributed across the country. Management is localized to the Oslo area and is headed by a Grand Prior with the support of a Convention.

A significant part of our business is conducted through humanitarian efforts. The work is organized through Grand Priory Humanitarian Fund, and the Priorat Norway contributes funds.

In the time 1993-2001 was the Nordic effort devoted to upgrading and development of a child home in Talinn, Estonia. Where about 130 orphans, many severely handicapped, got a worthy upbringing that gave a positive hope for the future. Since 2002, the Knight Templars Humanitarian efforts directed focus to a similar project, with ambitions to rearm and contribute to a positive development of children rehabilitation center "Blåsippan" outside Kaunas in Lithuania. Blåsippan is an institution for children aged 1-16 years.

Wish you a pleasant reading!