Saturday, December 8, 2018 at 10:00 am Priorat Sweden's first command was started. Commandery Saint Peter with headquarters in Lund. On the day of honor, the Knighthood was held in the Abbey Church (St. Peter's Abbey Church), built around 1166 and with links to the Cistercian Order.

Before the opening of the Knighthood, Jörgen Forsberg, RThO, told us about the history of the Abbey church.

The knighthood was then started with the Ceremony Master Lars Molin, OffThO carrying in the standard, whereupon the choir and parenting of the deceased Lennart Wikfalk, RThO were implemented

Grand Prior emeritus Per Ölund, StKThO awarded the Officer's Degree to Sigvard Andersson, RThO as he was unable to receive the nomination for Priorat Sweden's Title of the Order on November 17 this year.

The commander's commander Göte Andersson, StOffThO then opened the Riddartinget, which was carried out in good order according to the agenda. 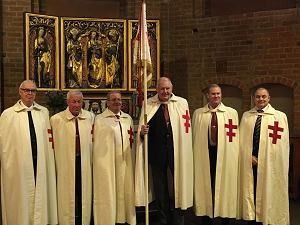 After the Riddarting, the day ended with a Riddarlunch at a nearby restaurant in Lund.