Templar Priory Swedish-Finnish got their start by a number of Finnish Knights were dubbed in Grand Priory of Scandinavia during the years 1987-1994.

In 1994 the Grand Priory, the Grand Prior General Gert Grottes leadership that the time was ripe for the founding of a Commendery in Finland. Commandery Swedish-Finnish founded then under the guidance of a master's Holger Hermansson, who was appointed commander of this. Commendary held its first annual Knights meeting 11 November 1995. The old church in Helsinki was the site of ceremonial and Knight's dinner was enjoyed in Free Masons house with the participation of Knights from both Sweden and Norway.

Welcome to the Priory of Swedish-Finland 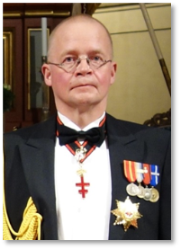 Priory of Swedish-Finland is part of Grand Priory of Scandinavia covering the Nordic countries and today has over 500 knights. After a number of deserving Finnish officers dubbed as Knights in Karlberg Palace in Stockholm was founded our Priory, first as a Commandery 1994 and then got the status of Priory in 1996.

Today the Priory of Swedish-Finland is 80 Knights and when our words have a military dimension is the Knights is officers or reserve officers.

The outreach activities consist mainly of humanitarian assistance as we run through Grand Priory of Scandinavias Humanitarian fund. This fund supports in recent years, children's homes, rehabilitation centers and help for street children in the Baltic countries.