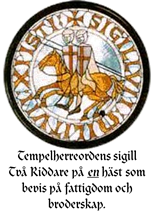 The Knights Templar seal these nine knights, led by Hugues de Payens of Champagne, had faced the Patriarch of Jerusalem sworn the monastic oath of poverty, chastity and obedience. They called themselves the "Poor Knights of Christ" and had initially no specific words costume without wearing regular clothes.

The Knights remained in their weapons, as opposed to those that applied in previous monastic tradition. The reason for this was that they saw as their mission to protect pilgrims in and on the way to the Holy Land and to present them safely to the holy places where Jesus lived and worked.

King Baldwin gave them the al-Aksa Mosque on the south of the Temple Mount in Jerusalem that time. It became the Order's administrative center and mosque organized stalls for the knights horses. The place came the Crusaders to call Solomon's Temple. This led to the Knights designated from "Christ and Salomon Tempel toast", "Knight of Solomon's Temple", "Templars" to "Templars".

The modern Knights Templar is an international, global, spiritual and Christian Chivalry, open, independent and apolitical. Count Fernando Pinto de Sousa Fontes, based in Portugal, the Order's head. Knights of the Order rituals, rules and operations are fully open.

Knights Templar today has the following aims for its operations

The Order object is achieved by the individual KNIGHT belief!

We regularly receive questions regarding our business and our historical connection to the Knights Knight Templar's origins. Here you will find frequently asked questions (FAQs).

The following institutions are established